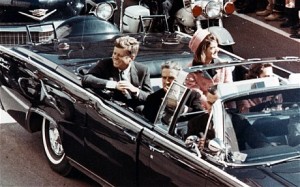 By common confession, great is the mystery of godliness: He who was revealed in the flesh, Was vindicated in the Spirit, Seen by angels, Proclaimed among the nations, Believed on in the world, Taken up in glory.

One of the greatest mysteries today stems from a dark day in American history. On November 22, 1963, President John F. Kennedy was assassinated in Dallas, Texas, by a sniper. Many theories exist concerning the identity of the actual shooter, from where he shot, and why he pulled the trigger. Some people believe a shot was fired from a grassy knoll nearby. Some believe Kennedy was assassinated for his political platform. Some believe that Kennedy was shot once; others believe he was shot twice. Active imaginations consider certain details of the events surrounding the assassination to mean things other than the obvious. We do know from history that Lee Harvey Oswald was arrested for the assassination and was later shot by Jack Ruby as Oswald was being escorted through a crowd. Regardless of the suspected how’s and why’s, the actual cause and reasons behind President’s tragic death is commonly unknown. Perhaps time will uncover new evidence which will put to rest the mystery behind the assassination of President Kennedy.

We read of an even greater mystery in God’s Word. Facts concerning the mystery were revealed over several thousand years, and the mystery has yet to be fully understood. The twists and turns as well as the irony and paradoxes of the mystery cause us to wonder at the infinitely marvelous revelation of God in the person of Christ. The plan of God for man’s redemption is well beyond the ability of the human mind to grasp. At the same time, the plan of redemption is a simple as “A-B-C”. The fact that an infinite and eternal God could make Himself as one of His creatures to live in a finite and temporary manner is difficult to understand, though it is revealed progressively through the Scriptures.

People everywhere love a good mystery, and God’s people love and thrill at the mystery revealed in the Scriptures. Paul presents this mystery to Timothy to excite him about the thrills of ministry. Paul writes the letter of 1 Timothy, one of the letters in the section of the Bible called the Pastoral Epistles, to a young man about to enter his first pastorate. Chapter three details the qualifications for spiritual leaders. In order to impress upon Timothy the significance of his new pastoral duties, Paul summarizes the most thrilling aspect of ministry. The mystery of redemption is the foundation of ministry, since without redemption salvation would be unavailable to mankind and no need would exist to tell people about redemption. You ought to thrill with Paul and Timothy at the wonder of the greatest mystery of all time.

The word translated mystery is the word musterion, which come from the root word which means to shut the mouth. Musterion was a common word associated with the private rituals of secret organizations. A modern example of a secret organization would be the Masons, which practice many ‘secret’ rituals and signs. Ask a Mason to tell you exactly what they do in their meetings, and he will tell you that what they do is secret. The Gospel is only a mystery or a secret in the sense that God did not reveal His plan of redemption all at once. God created in man an innate knowledge of His existence, and it is man’s responsibility to explore God’s existence. Jeremiah 29:13 says, “You will seek Me and find Me when you search for Me with all your heart.” God will reveal Himself and His plan of redemption to all who sincerely desire to know Him. The Gospel is not a secret. Paul tells his readers that his ministry of the Gospel was not a secret. 2 Corinthians 4:2 says, “but we have renounced the things hidden because of shame, not walking in craftiness or adulterating the word of God, but by the manifestation of truth commending ourselves to every man’s conscience in the sight of God.” Paul told the Thessalonians, “3For our exhortation does not come from error or impurity or by way of deceit; 5For we never came with flattering speech, as you know, nor with a pretext for greed–God is witness–” (1 Thessalonians 2.3,5.)

While we believe the Gospel is a message of good news, and while we understand it to be a joyous theme, the mystery of redemption is something which we tend to keep quiet. The Gospel is not something you should hide. Christ said, “14You are the light of the world. A city set on a hill cannot be hidden; 15nor does anyone light a lamp and put it under a basket, but on the lampstand, and it gives light to all who are in the house. 16Let your light shine before men in such a way that they may see your good works, and glorify your Father who is in heaven.” Unfortunately, many Christians act practically as if they belonged to a secret organization. The reason this has happened lies in the fact that Christians do not thrill at the thought of Christ. When they speak of God, church, or religion, they do so with as little passion as they would when describing how to make toast. Also, Christianity has become its own little sub-culture, using its own jargon. We must learn to relate to the lost with enthusiasm using language they can understand. In our pluralistic age, we must seek to meet men where they are. We must use language which is understood by both the lost and the saved. When we refer to God, we must be absolutely clear as to who God is. When we tell a person of salvation, we must be specifically identify the meaning of salvation.

Our text has summarized the entire Bible in one sentence. We ought to be ready to give an answer to any person who asks us of the reason of our hope. We ought to be able to defend our beliefs against any unbiblical philosophy or worldview. The basis of such an ability comes from a complete trust in the person at the center of the greatest mystery of all time. Such trust can only come from time spent with Christ. Do you remember your time in history class? You had many dates to memorize. You wrote the dates on a piece of paper and memorized them. The reason you had to memorize the dates is that you had little desire to know and no familiarity with the events and little realization of their importance. The average sports fan has no trouble remembering statistics about their favorite team or athlete. The reason lies in the fact that he has a desire to know these things. When you have spent time with Christ, and your desire is only for Him, you will remember the details about Christ. You will be able to defend your salvation with ease. As you yield yourself to the Holy Spirit, He will bring what you have learned to your mind so that you may be able to behave accordingly in light of the mystery of redemption. Study the greatest mystery of all time. Have a passion for discovering the details you do not know. Enjoy your time spent studying the length, and depth, and breadth and height of the mystery of Christ.

What are your thoughts on this verse?

According to the verse, what six things make the mystery of the Gospel?

Since the Gospel is not a mystery, what should the believer do with it?

How do we develop trust in the Person at the center of the Gospel mystery?

Posted on April 7, 2014, in New Testament. Bookmark the permalink. Leave a comment.